In the first half of the year 2016, WOLFF GROUP was assigned by one of the largest breweries in southern Poland with the task of adapting 3 new lines of a malt storage and transport plant to the requirements of the ATEX Directive. As a result of a tender proceedings, WOLFF GROUP received the highest score for technical solutions and expertise. The high score and a competitive price for the implementation of the whole task in the “turn-key” formula won us the contract.

The task was divided into three stages. Since the work was carried out during normal production, the order was processed gradually. Respective parts of the installation could only be shut down in succession, so the continuity of production was maintained and WOLFF GROUP could conduct the refurbishment in a safe manner, in compliance with the internal requirements of the Group and applicable occupational safety regulations.

The order covered the selection and design of appropriate explosion protections, consultations and obtaining of a final acceptance of the insurance and consulting company of the Group. In addition, the scope of work included the supply and installation of explosion protections compliant with the ATEX Directive, execution of necessary modifications and reinforcements on the plant, as well as drawing up of as-built documentation and delivery of relevant ATEX certificates.

In the first stage, preventive systems were built in with the aim of reducing the occurrence of potential ignition sources associated with the introduction to the plant of metal elements during pneumatic transport of malt. In addition, at malt reception systems, high-performance magnetic separators were installed to catch the smallest particles of metallic origin. As a result, one of most dangerous sources of ignition was eliminated. The preventive measure was effective, however, it did not relieve the user from the necessity to apply constructive explosion protections compliant with the ATEX Directive.

In the second stage, we focused on constructive protections for the malt transport and storage plant as aimed at isolating (decoupling) of explosion at pneumatic transport systems as well as at dumps and charges to storage tanks. At pneumatic transport systems, the most effective explosion isolation (decoupling) systems were applied, namely quick opening gate valves controlled by dedicated control panels, as well as fibre optic sensors of flames/sparks.  The system as a whole has the ATEX certificate as required by law. At charge and dump systems of storage tanks, faulty or missing cell feeders were replaced or added. Since the plant in the original form caused a high risk of cascading transfer of explosion throughout the malt-house, the cell feeders were also installed in the design compliant with the ATEX Directive. The feeders have ATEX certificates proving their resistance to breakthrough of potential explosion effects, i.e. pressure and flames. Only such feeders can be used as stand-alone explosion decoupling systems.

In the third stage, we proceeded to installation of explosion protections at malt storage tanks. After lengthy consultations in an international team, it was decided that the tanks will be secured by provision of the so called type VQ flameless explosion venting systems. Due to the location of the tanks inside buildings and the impossibility of safe evacuation of explosion effects with the use of decompression channels on the outside, the provision of HRD and VQ systems was considered. Ultimately, we decided to install flameless explosion venting systems on account of their simpler construction.

At the end of the work, WOLFF GROUP was asked to modernise and extend power supply systems, pneumatics systems and control signals in order to control properly the manufacturing process and enable its proper stoppage in the event of activation of any of the built-in explosion protections.

All the commissioned work was successfully completed at the beginning of the second half of the year 2016 and accepted by the investor without any reservations.

Is an Ex d or an Ex e distribution board a better choice? Choose the right option based on a real-life example.

Delivery of emergency lighting supplied by a DualGuard-S central battery

Fire Protection of Machinery on the Example of a Completed Task 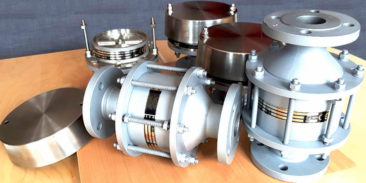 BARTOSZ - I am at your disposal
+48 602 659 682
info@grupa-wolff.com
We will answer questions about: offer, technical specification, delivery, assembly.