An explosive atmosphere was ignited at the ExxonMobil refinery in Baton Rouge on 22 November 2016. Four people were injured in the event, two of them seriously. The fire was caused by unintentional release of 0.9 tons of isobutane into the atmosphere. A cloud of flammable gas encountered an ignition source just 30 seconds after the installation was unsealed.

CSB investigation showed that the refinery had long been facing failures of manual shut-off valves. The problem related to gears which from time to time refused to work, making it impossible to open and close valves. When there was such a problem, employees unscrewed and removed the gears and then closed or opened the valve by turning the valve stem using a hydraulic wrench. Although no procedure was written down for this type of activities, such proceedings were carried out with the general consent of the supervisors.

Direct cause of isobutane leakage and fire

On the unfortunate day, two employees of the alkylation department were preparing the installation for maintenance work. One of their tasks was to incorporate the secondary isobutane pump into operation. For this purpose, it was necessary to open a valve located on the pipeline connecting the isobutane tank to the pump and further to the rest of the installation (Figure 1). The valve had a manual drive with a gear, which on the day of the accident worked incorrectly – even though the employee turned the cock, the valve remained in the closed position.

Fig. 1. Fragment of system alkylation system inside which isobutane was emitted. The valve from which the emissions occurred is marked in red.

In order to bypass the fault, one of the employees decided to unscrew the gear and then open the valve using a spanner – at the alkylation department, disassembling the gear in the case of malfunctioning shut-off valves was a widely accepted solution. Although the operator could unscrew the two horizontal screws fixing the gear to the metal bracket, he finally decided to unscrew the four vertical screws fixing the gear to the valve body through a metal bracket (fig. 2). It was a fatal mistake that directly led to the disaster.

Fig. 2. Design of the valve from which isobutane was emitted. Only about 3% of the shut-off valves from about 500 located in the alkylation department had the design presented above. In the remaining 97% of cases, the gear with metal bracket was mounted to the valve connection port and not to the valve top cover.

Choosing to dismantle the gear by unscrewing the four vertical bolts, the operator at the same time unscrewed the upper cover of the valve, which was responsible for its sealing. When one of the employees, using a spanner, turned the valve stem, pressurised isobutane unsealed the safety-critical components of the valve. Around 0.9 tons of gas were released, which formed a white cloud. After only 30 seconds, the spreading gas encountered an ignition source – it is suspected that it potentially was a welding device about 20 metres away. 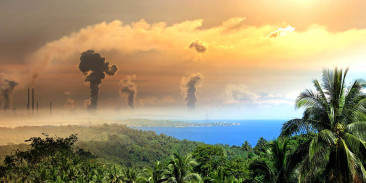